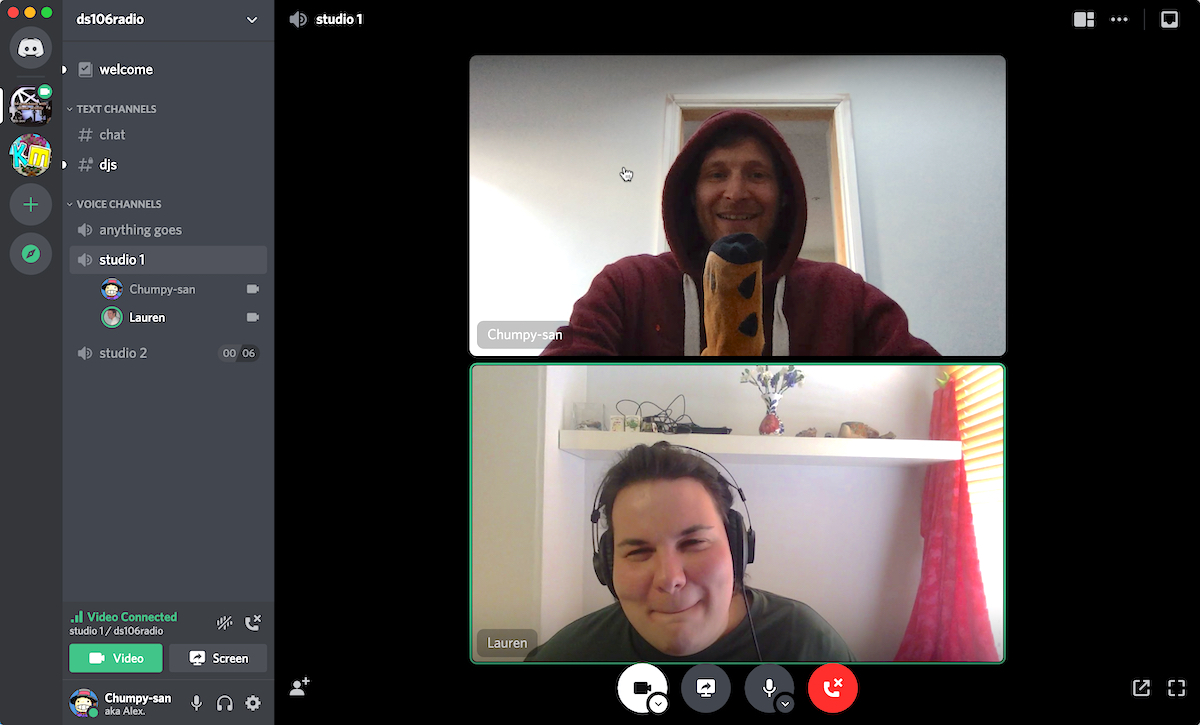 I’ve had a blast these last few months as Lauren Heywood and myself have taken to the DS106radio airwaves to do our own little radio show. What started out as a bit of a test to see if we could pull it off has quickly become a regular DS106 slot, every Friday from 4-6pm GMT. The perfect time to usher in the weekend here in Britain.

We play a bunch of songs, sometimes with a theme and sometimes just whatever pops into our heads, and then proceed to chat about anything and everything. Somehow it seems to be working out, which is awesome.

Originally we had talked about doing some kind of podcast, but after an initial attempt, it seemed as though doing it live on air would be a more natural and organic form of conversation that prevents us from overthinking the process too much. It forces you to just go with the flow in a way that’s quite hard to achieve in a pre-planned podcast setting. The live stream is unforgiving, but at the same time it’s incredibly freeing, as you simply don’t have the time to overthink things. This is something I think we both appreciate as we’re quite the sticklers for detail and trying to perfect things. The time it’s taking me to write this post is a case in point!

As stressful as some people might find hosting a live radio show to be, I find it quite relaxing. I think that’s partially thanks to Lauren, who has kindly taken on the role of streaming the show from her end. Something I’m incredibly grateful for, as I usually find myself behind the curtain, turning the wheels and toggling the switches. To be able to take part in something and not be responsible for making it all work seamlessly is a welcome change, and one I greatly appreciate.

Lauren’s also been recording a bunch of our past episodes and diligently blogging them, complete with the track lists and any notable tweets and links from each episode. Again, I couldn’t be more grateful.

On top of that, we’ve been testing out a new community setup using Discord, which we now use to host our show through voice channels and live chatrooms. It’s working great so far and really adds an extra level of interaction for us as we can respond to messages instantly and the chat keeps us from flailing about with nothing to say 😂. Hopefully the Discord setup can be useful for other DS106 folks if they’re interested in using it in the future. I know Jim has been dabbling with it since for the awesome OERxDomains 2021 conference, so that’s cool to see. We’ll keep refining it as we go, whatever happens, but if you want to join the Discord server then ping one of us on Twitter and we’ll happily add you to the mayhem chat.

The DS106radio community has been awesome too. I’ve made some new friends along the way and had countless laughs in the twitter feed. They’re such a great bunch of people and it’s been a shelter in the storm during these past few months of winter lockdown due to the global pandemic. With little ability to meet and interact with people physically, being able to tune in – or broadcast – to the DS106 community has helped make lockdown feel that little bit less isolating and monotonous, so thanks guys! 🙂

And a big thanks to Jim Groom especially, your kind words, infectious enthusiasm, and encouragement mean a lot. 👊 Big love.

So here’s to many more Fridays, and possibly some other shows in the future. If you listen, don’t forget to tweet us at #DS106radio 4life.

Thanks for listening 🌼 see you next week #ds106radio